The Tony Awards are a couple of years behind me & my crew now, but I continue to create digital screens for many other clients–including some that came directly from the Tonys.

In sending some examples to another show recently, I came across these edits from 2012 & 2013 that show our work on the shows. I don’t think I ever went through the trouble of editing together the other years, but these two are pretty fun.

And…here are more highlights, this time from 2012 during the 66th annual broadcast:

For the five Tonys broadcast between 2011 & 2015, we were tasked with digitally recreating and animating theater sets for each of the performing nominees.

We started the process by shooting thousands of photos (and several gigs of reference video) inside the various theaters, in order to capture lighting changes and set elements. The photos were then carefully mined for textures and scenic pieces that were needed. Finally, the finished video-based “sets” were painstaking constructed from this large bank of imagery and then animated in After Effects and Cinema 4D to the specifications of the set & lighting designers.

Lots of hard work and long hours were put into separating & layering the video content so that we could do things like dynamically shift hues and cue lighting/set changes during the performances. 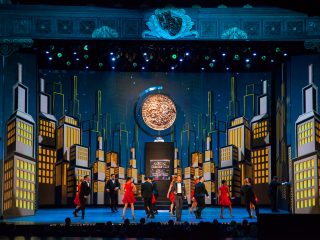 Previous Post (p) FROM THE ARCHIVE: Digital screen design for the big Show Open at the 67th Annual Tony Awards 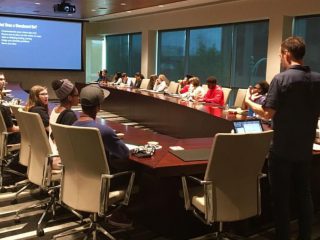